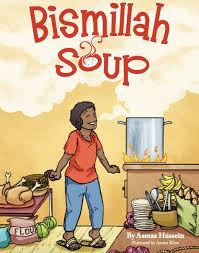 BismiAllah Soup is an updated version of the children’s classic Stone Soup. In Asmaa’s rendition, the story is set in a rural setting and features a Somali family. The story opens with Hassan, the book’s central character, waking up to the realization that there may not be enough food for dinner. Hassan’s father has been away for a few weeks due to work, which has resulted in a shortage of food at home. A determined Hassan confidently tells his worried mother, that he will provide a feast for the family that night. In search of assistance, Hassan approaches Shaykh Omar at his local mosque for help. Shaykh Omar reassures Hassan that he will be able to organize the feast, as long as he says BismiAllah (in the name of Allah). The rest of the book follows Hassan as he begins sourcing ingredients for his soup, which ultimately results in a feast, for his family and community. 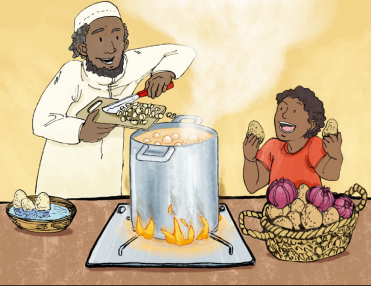 This book imparts several lessons for readers. The central theme of the book is the importance of beginning actions and sayings with the name of Allah, by saying BismiAllah (in the name of Allah). By saying BismiAllah Soup, each time Hassan mentions his soup he is invoking Allah and in turn, making supplication for the meal.  The second theme is the importance of working together to achieve a common goal. Hassan is only able to make the BismiAllah Soup, by mobilizing his entire community.  Lastly, the book stresses the importance of charity within Islam. Though the soup could have only been for Hassan and his family, by the end of the book the entire community comes out to eat with Hassan and his family. The centrality of family, the mosque and the broader community to everyday life, will be very familiar to Somali and Muslim families.

It is rare that Islamic children’s literature feature Somali characters and families, which makes this book a standout addition to the genre. Aside from writing a story that will resonate with many Somali families, Asmaa also uses the Somali words for father (abo) and mother (hooyo) throughout the story. 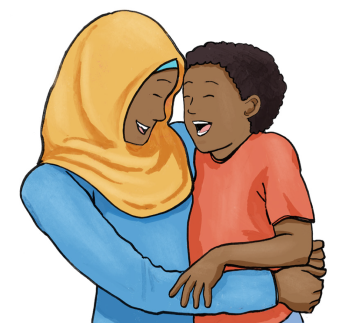 As we have covered in many of our previous reviews, illustrations in children’s books are such an important part of the story. Much of the existing children’s literature is dominated by images of White children, which often result in Somali children not being able to see themselves reflected in the images and narratives of mainstream children’s books. This book is well illustrated, and features a Somali family and community members. Young Somali children will easily be able to see themselves reflected in the images of this story, and be able to connect Hassan’s experiences with many of their lived experiences. By reading books which reflect the diverse social worlds of children, children begin developing positive associations to literacy and learning in general, proving transformative for the education of culturally diverse children.

One of the drawbacks of much of the existing Islamic children’s literature is that many of the children’s books are poorly written. Asmaa’s book is engaging and very well written, and will captivate children and adults alike. I personally shared this story with my 3-year old niece, who absolutely adored the story! 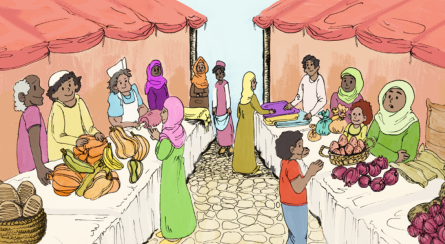 In future editions of this story, it would be incredible to include a Somali translation which would facilitate the engagement of Somali parents, who may not be able to read English. A dual language children’s book would also assist Somali children who are trying to learn Somali literacy. Dual language books have been documented to increase culturally diverse children’s interest in reading, their motivating to read, and ultimately their reading achievement levels.

Overall, this is a wonderful addition to the multicultural and Islamic children’s literature genres. I hope that more Muslim authors will follow in Asmaa’s footsteps and feature Somali characters in their children’s books. 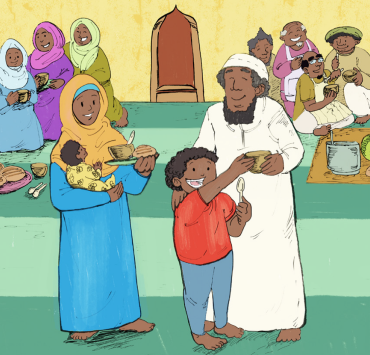 If you are interested in purchasing BismiAllah Soup, you may do so here

Note: Many thanks to Asmaa Hussein, who was kind enough to send us an e-copy of the book for this review. JazaakAllahu khair.