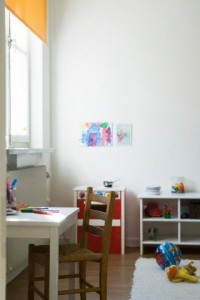 I’ve often heard from teachers and parents alike about the many characterizations of Somali children – that they are ‘rowdy’ or ‘loud.’ While others may state this is simply part and parcel of being a kid, it’s important to note that there is a time and a place for everything. For example, a child cannot continue to color his/her drawing if it is circle time and the teacher has called all the children to the mat. All of us – children included – have to adhere to the ‘rules’ of our different environments, which dictate that some behaviors are appropriate in some settings, but not in others. During a literacy workshop I was involved in, the children of the attendees were increasingly becoming disruptive (hindering the focus of some parents). Not many would anticipate that role play would be the perfect antidote – creating a win-win situation for parents and children alike.

Play can help children develop self-regulation skills, including cognitive and emotional regulation. I witnessed the transformative power of role play in helping children exhibit exemplary self-regulation skills in the context of the literacy workshop. When I noticed that some parents were unable to concentrate on the workshop because of the rambunctious nature of the children, I ushered the children (aged 4-7) out of the main room and into the adjacent room. Immediately, I set up a role play scenario: the 6 year old boy and 7 year old girl would play the father and mother respectively. The remaining children were to play the children of the family. I was to be the grandmother and would visit on the weekends. Before I went back to the workshop, I made sure that the ‘mother’ and ‘father’ were apprised of their responsibilities and stayed until I saw them taking control of the scenario (e.g. taking requests from their children about what they wanted to eat, handing out food, allowing the children to go to the bathroom after having asked permission, etc.). In this way, the children were effectively able to ‘babysit’ themselves. To my surprise, the noise level was significantly lowered and when I would go to check up on them (that is, to ‘visit during the weekends’), the children were eating and talking but not engaged in the chaotic, loud play they were involved in prior to the role play.

By adhering to the role play, the children were able to regulate themselves within the confines of their roles as either parents or children. They stuck to their assumed identity throughout and lived out their character during the role play. Each time I would visit as grandmother, I kept being pleasantly surprised at the scene – namely because these were the same children who moments ago were engaged in rowdy play. This instance reinforced the power of play and immediately made me think of the connections and transferability of the skill. Self-regulation skills would benefit a child in all settings of their life and has particular applications in its manifestations in a child’s behavior. That is, the skills would benefit a child’s ability to adapt to new surroundings (particularly their transition to school life), develop a child’s comfort with being compliant to an authority figure, build up a propensity for a child following rules, as well as a capacity to socially engage with peers in an appropriate way. Furthermore, a strong foundation in the development of self-regulation skills from an early age helps to promote not only a healthy and stable childhood, but such skills (or lack thereof) are also seen in adolescence and adulthood.

Play is the embodiment of a natural process that we all encounter in the early stages of our lives. It is a common universal language known to all, despite the existence of cultural differences. Perhaps that is the magic of play – its universality and its many diverse forms. In a way, play maintains its fascination because as universal as it is, adults often do not ascribe meaning or significance to it. Instead, many simply view it as something children do as a part of growing up. To consider the aforementioned scenario through the lens that the children were no longer rowdy and did not disrupt the adults is an incredibly simplistic and one-dimensional way to look at it. Did the role play benefit the adults? Indeed, it did. However, we wish to shine a light on the benefits that the children received and more to the point the sustained benefits that they shall receive if they continue to engage in role play. Children can develop firmly established self-regulation skills through role play, the effects of which can be noted in their overall behavior and social-emotional development. In light of this, play no longer is seen as a frivolous past time, but indeed a necessary and integral part of one’s development. We learn, then, that it truly is more than just a game.

5 thoughts on “More than Just a Game: The Power of Play”