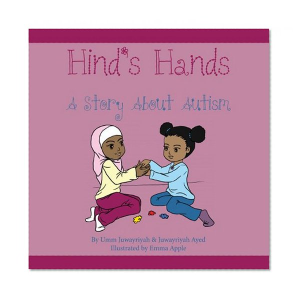 We are thrilled to share another book we recently discovered, which will be of interest to families which have been impacted by Autism. Based on a true story, Hinds Hands takes us through the special relationship between a young girl and her sister, Hind who has a diagnosis of Autism. The author, Umm Juwayriyah is a writer and educator who has authored other books geared towards Muslim children including The Princess and the Good Deed and The Size of a Mustard Seed. This is not only an important contribution to the field of Muslim children’s literature, but literature geared towards children impacted by disabilities. Autism is a disorder which has touched the lives of so many Somali families. We often times do not think of culturally relevant literature for children with developmental disabilities but we certainly should. Through stories like Hinds Hands, children with Autism will be able to see their stories and experiences mirrored back. For siblings of children impacted by Autism, they will be able to relate to the experiences and emotions faced by Hind’s older sister. For parents, an important validation of their own experiences. For those not directly impacted by Autism, this story will breed understanding and God Willing, acceptance.

Hind’s Hands is a simple story, which centers around the lives two Muslim children, Juwayriyah and Hind. The story is narrated by Juwayriyah, Hind’s older sister. Throughout the story, Juwayriyah documents her own journey of learning about her sister’s diagnosis and her eventual acceptance of Hind. The highlight of the story, as the title suggests is Hind’s hands. Juwayriyah discusses the many different functions of Hind’s Hands from communicating with others, since she cannot speak to making a mess, after Juwayriyah cleans up. After one such incident involving Hind making a mess, Umm Juwayriyah’s message to her daughter Juwayriyah is that she should be patient, pray and make du’aa (supplication). After taking her mom’s advice, Juwayriyah learns that Hind calms down, when her hands her rubbed together (an important inclusion for parents familiar with sensory issues in children with Autism). The story ends, with a reminder for older sisters and brothers to be strong role models for their younger siblings with Autism.

Hind’s Hands was inspired by the author Umm Juwayriyah’s daughter Hind and her sister, Juwayriyah. Hind was initially diagnosed with a rare form of epilepsy called Infantile Spasms when she was 9 months of age, and was formally diagnosed with Autism, at two years of age. For Umm Juwayriyah, it was important that her oldest daughter Juwariyah learned how to advocate for her younger sister, and teach other children that Allah made Hind special and different. In writing the book, Umm Juwayriah was interested in jumpstarting a conversation on Autism awareness and advocacy within the Muslim community. Since writing the book, many parents who have children with Autism have reached out to Umm Juwayriyah for advice, particularly around integrating children in their communities without fearing stigma.

Emma Apple’s illustrations are captivating, and beautifully capture a Black Muslim family, a group too often missing from children’s literature geared towards Muslim children. It is very rare to see books with images of Black Muslim protagonists who have children with disabilities. This is a book that will really strike a chord with Somali Autism families.

Autism is a disorder that has impacted so many of our families in the Somali community. In our discussions around Autism awareness and advocacy, we cannot forget our children. This book is a wonderful step in making children feel included in this very important conversation. This book would also be beneficial for teaching typically developing children about Autism and how to effectively interact and engage with children diagnosed with Autism. 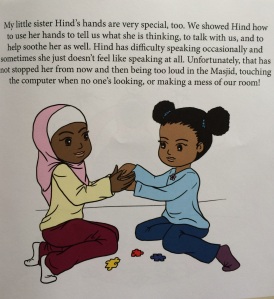 This story, while written in the English language, can easily be adapted for Somali language speakers. Using the images as a guide, parents can create their own stories in Somali. Parents are encouraged to get creative with their storytelling, perhaps even adapting the story based on their own lives.

Hinds Hands is such an important contribution to the field of children’s literature catered for Muslim children, who are Black and who have experienced disability. This is a group that has largely been absent from children’s literature. We strongly encourage that you check out Hind’s Hands and hope that this will be the start of many children’s books, targeted for this population.

*for this review, we contacted Umm Juwayriyah who was kind enough to share her story and motivation for writing the book. Thank you sister, jazaakAllahu khair.

4 thoughts on “BOOK REVIEW #3: Hind’s Hands: a story about Autism”