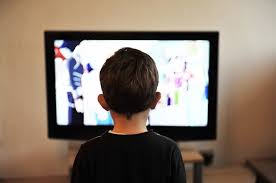 Picture this. You are a busy mother trying to keep an eye on your young children, while trying to get dinner ready. What to do? The truth is some would turn the TV on, in hopes of occupying the kids for a short while. In many Somali households here in Ohio, the TV has been given the troubling nickname of ‘babysitter’, because of its ability to occupy children for hours on end. Children’s programming in the US has become a huge industry spawning TV shows, toys, books, DVDs and countless other things. DVDs like the Baby Einstein series imply that your youngsters will turn into geniuses, if only you purchase their products. Television sets are not a recent phenomenon, as they have been a staple of American living rooms for decades. What is different now is with parents busier than ever, children are being exposed to television sets earlier than ever.

In non-English speaking households, it’s seen as a godsend as the child is occupied and can learn English at the same time. But what are some of the consequences of exposing our children to televisions from such a young age?
Let me briefly go off topic by discussing language development in early childhood. Birth to three years of age is a hugely critical time for a child’s language and social development. Children in most cultures develop language through interaction with parents, relatives, peers and/or adults. For most children, this starts with a mother’s stories, rhymes, lullabies to her young child. The child takes everything in passively, interacting with his/her mother non-verbally through a smile, a touch or other ways. Furthermore, through play and interaction with others, a child develops important pre-linguistic skills including turn-taking, motor imitation (i.e. imitating actions), sound imitation, eye contact and joint attention (shared enjoyment between a parent and child, when the child is playing) all which are important for a child’s language development.  By the time the child is starts to utter his/her first word, he/she is equipped with a rich vocabulary. Through interactions with his/her environment, the child’s language develops.

So from a language development perspective, what harm is incurred by exposing a child to the television? The answer depends on how long the child watches TV. For the young child, who has not yet developed language, prolonged television exposure can have negative consequences on the development of important pre-linguistic skills mentioned earlier. While limited research has been conducted, as a Speech Language Therapist I have worked with several Somali families with non-verbal children; the commonality between these families, is that the children typically watch several hours of television per day.  At the very least, this will delay those all-important pre-linguistic skills. And without pre-linguistic skills, a child will simply not develop language. The American Academy of Pediatrics recommends that children under the age of two should not be exposed to television and to limit TV for older children. Instead parents can replace television with activities proven beneficial for language development, including reading, and play. We have touched on the potential impact of TV watching on a child’s language development, now what about a child’s cognitive development?

In contrast to language development, studies have been carried out on the impact of TV on a child’s thinking. The results have been worrying.  The most comprehensive study assessed 1278 children aged 1 and 1345 children aged 3 (remember this is within the critical period for language development). The study found that TV watching “rewires” a child’s brain, leading to attentional issues by the age of 7 (Christakis, Zimmerman, DiGiuseppe, & McCarty, 2004). Dimitri Christakis, one of the researchers on the study, also added that the “pace of TV is sped up” leading the young infant to believe that the “quick scene shifts of video images” is normal (Lotus, 2004). He adds that TV watching may over stimulate the child’s brain, “causing permanent changes to developing neural pathways” (Lotus, 2004). As the child is staring at the TV, these hugely important neural pathways are not being developed. In my own practice, I have witnessed Somali children who need who require that constant stimulation, and when things ‘slow down’ in real life, children can become quite hyper active, and have difficulties attending to people and activities.

As parents and family members of young children, there is so much that you can do for your child’s language development! Here are some ways to support the healthy development of a child’s language, social and cognitive skills. All three of these areas are key in ensuring that your children will be ready for school, once the time comes:

As mentioned earlier, there is a limited amount of research in this area. Additional research is required on the short term and long term impacts of television on children’s language and cognitive development.

American Academy of Pediatrics. Media and Children. Retrieved from  http://www.aap.org/en-us/advocacy-and-policy/aap-health-initiatives/Pages/Media-and-Children.aspx